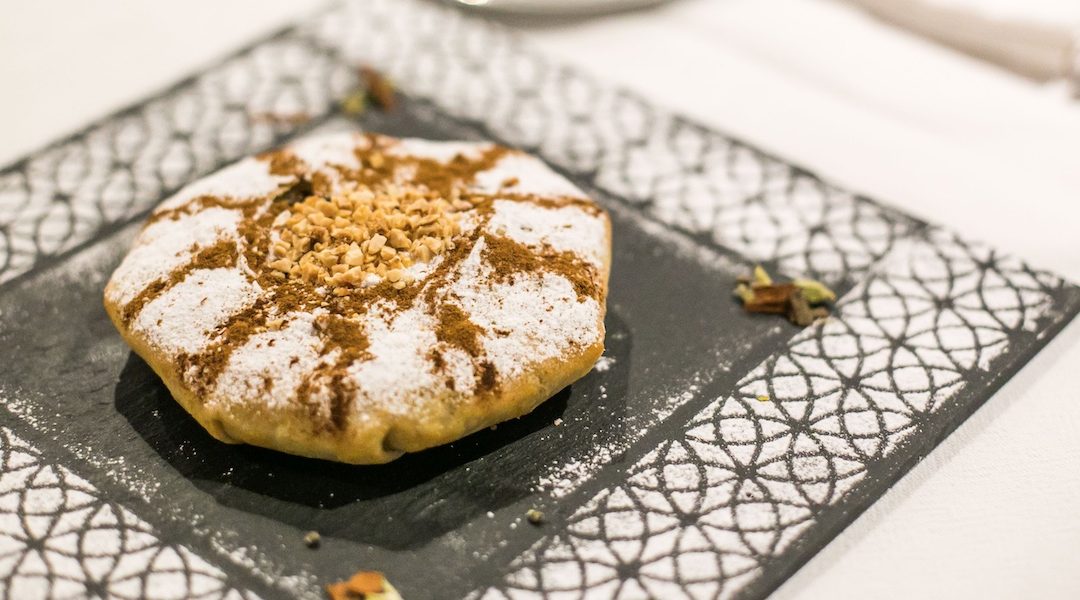 Moroccan gastronomy illustrates the country: warm, generous, colourful, fragrant, subtle…
Morocco’s cuisine reflects the country’s rich and varied cultural heritage.
Subtly composed of a wide range of flavours and striking scents, Moroccan gastronomy is a harmonious blend of Berber, Arab-Andalusian, and Jewish culinary traditions.
Mechoui, pastilla, tagine, couscous… Moroccan cuisine is all about patience and tradition.
We take you on a journey of thousand flavors.

MOROCCAN CUISINE: A JOURNEY THROUGH SENSES

In souks, spice stalls create a striking array of colors and flavors: the red of paprika, the beige of cumin, the yellow of turmeric, or the green of aniseed seeds compose a palette of colors and senses.
These natural products are presented in woven baskets or plastic bins. A true hymn to the senses.

The origins of Moroccan cuisine

Moroccan cuisine is characterized by a great diversity of dishes. Best known are couscous, countless tagines, pastilla, and mechoui. Yet there are more dishes often known only to Moroccans, such as tajine mrouzia, harira (traditional lentil soup of breaking the fast of Ramadan), seffa (sweet couscous) and recipes more specific to the regions.
Moroccan gastronomy is defined by the various influences it has faced through history.
The Bedouins brought dates, milk, and bread while the Moors introduced olive oil, almonds, fruits, and herbs. The Arabs brought spices, not to mention the British who, in the 18th century, imported the famous tea.
Ultimately, sub-Saharan, Jewish and even Indian delights had significant influences on Moroccan gastronomy.

In Morocco, cooking recipes have always been family secrets and the first Moroccan restaurants did not appear until the 1980s.
Moroccan delights are the secret of the «dadas», the governesses of the Moroccan houses of yesteryear. They are the memory of the noble families, of their values and their cooking secrets, inherited from a rich oral tradition, which they themselves pass on to their daughters, when time comes.
Overall, women reproduce the actions and habits of their mothers and grandmothers. They ignore recipe books and precise ingredients measurements.
Hence, sitting at a Moroccan table is an encounter with cooking secrets, jealously kept in the memories of mothers and grandmothers for generations and not written to this day.
Tasting their dishes is unique a journey through time, flavors and families intimacy.
In fact, every Moroccan family will say that the best couscous, or the best tagine is prepared at their home and nowhere else.

Endless combinations of simmering spices and herbs are the secrets of Moroccan gastronomy.

Latifa Benanni-Smires was the first Moroccan lady to dedicate a cookbook to Moroccan cuisine. It has also been one of the first gift that I received from my husband, after we had met. I must confess that, at the time, I have not been really happy about the gift… Yet, till today, the book sits on one of my kitchen shelves, sticky and relatively damaged…

The author had decided to put on paper the secrets of family cooking, she, who did not know how to cook. The most famous book of Moroccan cuisine was thus born from the hand of a “bourgeois” who loved flavors but did not know how to concoct them. Her cookbook is therefore inked in tradition and honors the “dadas” and cooks who told their recipes to the lady who wrote them for the first time.
Finally, I must admit that the gift has not been such a bad idea:-).

Today, Moroccan cuisine is changing and evolving. The purists of tradition and young cooks clash over their views and definition of Moroccan food. The young Moroccan chefs, often educated by the greatest European chefs, aim to developing a new modern Moroccan culinary art.
Traditionalist Moroccans, on the other hand, do not like the principle of seeing their beloved cuisine questioned. Occasionally, I like to remind them that if the French chefs had not diversified their art, we would still be eating only sauerkraut and veal blanquette. Not that these dishes are not delicious, on the contrary, but modern cuisine brings something else, a visual spectacle, on the one hand, and more subtle and complex flavors, on the other hand. In fact, nothing prevents the two from coexisting together.

Trained at El Bulli, Catalonia’s famous Michelin triple star rated restaurant, Najat puts passion and imagination at the heart of her culinary creations. Nestled in the heart of a small alley in the medina of Fez, the Nur Restaurant is a symbol of a forward moving Morocco. Yet tourist guides are often reluctant to recommend the place. For them, Najat’s cuisine is not Moroccan. In fact, they just do not understand her inventive cuisine. Yet Moroccan flavors are to be found in all her dishes. Unique degustation menu composed of eight or nine creative and tasty mini dishes are a must try when visiting Fez.